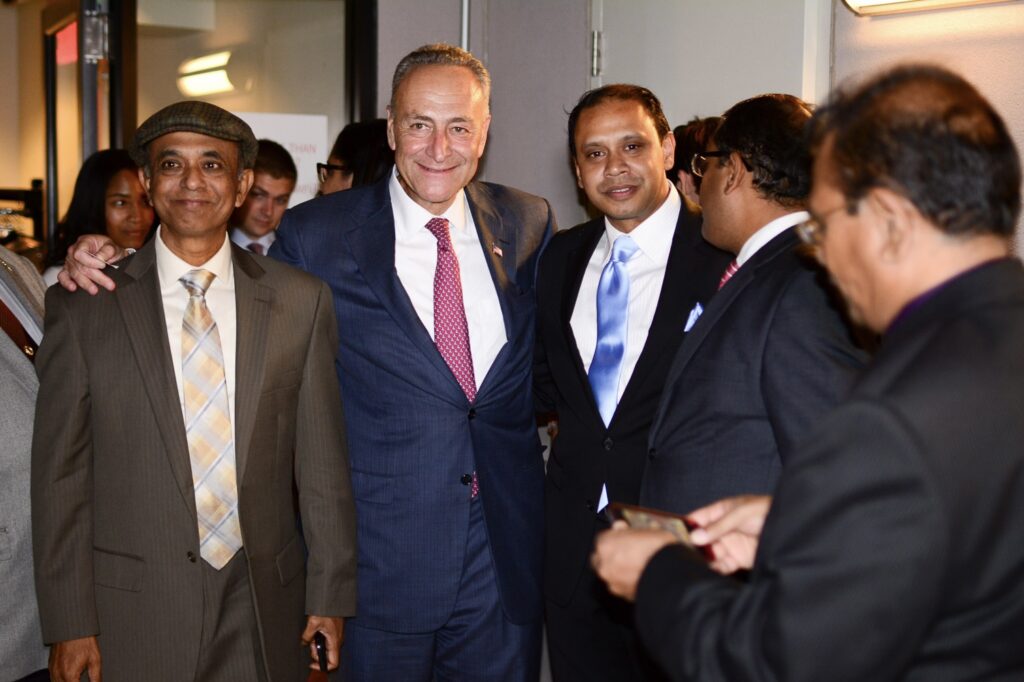 “An influential civil society leader, humanitarian, and advocate for Bangladesh and its people, Zahid F. Sarder Saddi, thanked US Senate Majority Leader Senator Chuck Schumer for his support of a bill to rename the streets from MacDonald and Church in Brooklyn, New York, ‘Little Bangladesh.’”

YAHOO NEWS / NEW YORK, NY / July, 26, 2022 – Three areas in Brooklyn and Queens will soon be renamed in homage to the people that help shape their community and culture.

The New York City Council on Thursday, July 14th approved a bill to rename Macdonald and Church in Brooklyn as Little Bangladesh, Brighton Beach Avenue and Coney Island Avenue in Brooklyn as Ukrainian Way, and Woodside Avenue between 76th and 79th streets in Queens as Little Thailand. These communities have been instrumental in shaping New York City as a whole, and the rename is an effort to reflect that.

“This initiative is a celebration of the many contributions made by the Bangladeshi community in New York City,” says Bangladeshi Community Leader Zahid F. Sarder Saddi, Foreign Advisor to the former Prime Minister of Bangladesh Begum Khaleda Zia.

US Senate Majority Leader Senator Chuck Schumer (NY) recently made an appearance and spoke at the yearly gathering of the Bangladeshi American Society in New York at the Gulshan Terrace Party Hall in Woodside, a residential neighborhood in Queens.

Senator Schumer spoke with the press at the event about the importance of small businesses as well as fair wages for cab drivers in New York City. The Senator said, “My family used to run a small business. Many Bangladeshis have become the owners of many small-to-medium businesses by working diligently. Bangladeshis are a big part of the cab [taxi] industry in New York City. I am always vocal so that they can earn more. My father was a small businessman, my father-in-law was a cab driver, I know how hard it is for the working families in the Bangladeshi community.”

According to a recent study, 40% of New York City taxi drivers hail from South Asia, including Bangladesh, India, Pakistan, Sri Lanka, and Nepal. Prior to the pandemic, Asians in New York City owned 23% of all businesses. Bangladeshi New Yorkers by these accounts make a significant contribution to the city economically.

“Despite being from a different culture and speaking a different language, you have come to America from far and wide because you want to fill your life with happiness and make your children’s future beautiful. For this, everyone has to invest a lot of labor and talent. Through this, you are improving Jackson Heights, moving Queens to prosperity, and improving the community in New York and across the United States. This is how America is improving.”

Referring to the appointment of Bangladeshi-American Nusrat Chowdhury, who the Senator endorsed in her nomination for Federal Judge, Senator Schumer said, “I am determined to do everything for the welfare of the hardworking Bangladeshi community.”

Bangladesh Society, a non-profit community organization that promotes, spreads, and maintains Bangladeshi culture in the United States, held a recognition ceremony at the end of the event celebrating the establishment of Little Bangladesh.

Zahid F. Sarder Saddi has been involved in the Bangladeshi-American Community for over 25 years. He is an influential civil society leader that receives consistent praise for his efforts in playing a major role in drumming up support and facilitating action to carry the voice of Bangladeshi-Americans to lawmakers.

On the importance of culture to the Bangladeshi community of New York City, Zahid F. Sarder Saddi says, “As a society, we’re dedicated to preserving the history and culture of Bangladesh for people who have emigrated from Bangladesh, but still wish to keep the history, traditions, and culture of their home country alive.”

Members of the Bangladesh Society, like lifetime member Zahid F. Sarder Saddi, continue their work to ensure the voices of the growing community of Bangladeshis living in the United States are heard.